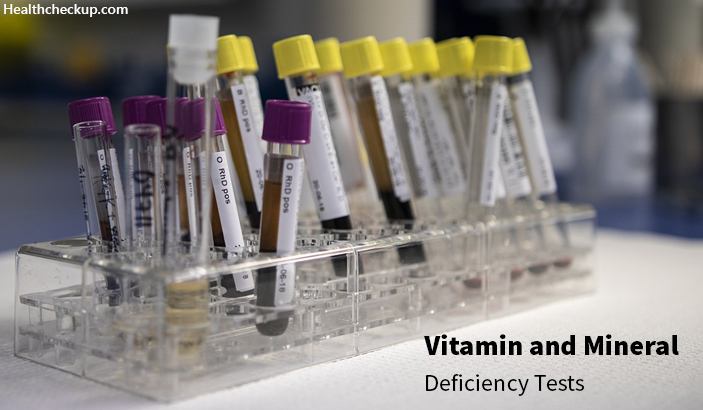 There are many reasons why a blood test for minerals and vitamin deficiencies may be recommended. In cases where a person may be consuming food from a limited number of food groups while avoiding others, it may lead to a nutritional deficiency. There are also cases where a person may have experienced starvation, and a test might be necessary to determine which minerals they might be lacking. Disease such as Celiac disease which is an autoimmune condition also cause malabsorption of nutrients in the small intestines leading to deficiencies and may require a blood test. Patients with Celiac disease have been seen to suffer a lack of vitamins A, B12, B6 and a decrease in zinc as well as a decrease in iron storage according to a study published on NCBI.

What Are Vitamins And Minerals?

Vitamins and minerals are also referred to as micronutrients and are needed for the functioning of the body’s systems. Minerals can be found in soil or by consuming various plants and animals, and their states are not usually altered by cooking or exposure to the natural elements in the environment. They are also useful in the body in the natural state in which they are consumed. Vitamins, however, are quite sensitive to environmental elements, and if not prepared or stored correctly, they will not be useful to the body.

Why Do We Need These Micronutrients?

The human body has numerous functions from brain function, circulation of blood, digestion, and other functions that work to maintain a stable internal and external environment such as sweating and heat generation. Women who wish to conceive are encouraged to eat foods rich in iron, which aids in the formation of the fetal spine and brain.

How Are Blood Tests For Micronutrient Deficiencies Performed?

Patients who require a blood test for micronutrient deficiency testing are sometimes required to fast for a period of at least 12 hours. This is, however, relative to the vitamin or mineral being tested.

There is a collection of urine and blood serum samples to measure the levels of the vitamins in the blood.

Various nutrients seem to have different modes in which their deficiency can be determined.

What Happens If There Is A Deficiency?

When a lack of micronutrient occurs, depending on which one it is, the patient suffers from a deficiency disease. The effects of these diseases can sometimes be crippling as seen in the cases of Rickets, which is a lack of Vitamin D and Scurvy- a lack of Vitamin C.

Additionally, certain nutrients are required to be present in an expectant mother while a fetus is forming, a lack of which causes serious birth defects. There are many forms of supplements that can be taken to alleviate the symptoms.

Minerals such as folic acid have been used in the prevention of birth defects, in particular, Neural Tube Defect which occurs during the formation of a fetus. According to a study on NCBI consumption of foods rich in folate as well as a dosage of 0.4mg a day of the iron supplement preconception, significantly reduced the occurrence of birth deformities.

Some studies show, however, that these dietary supplements should be taken in measured doses as overconsumption does affect a person’s health in the long term. In fact, these studies show that over-consumption of some of these supplements could lead to an increased risk of developing cancer.

It is therefore recommended unless in the cases of patients with diseases such as Celiac or extreme starvation, it is better to acquire one’s micro-nutrient needs from foods. This is because when consumed in food, the body only takes in what it requires for its functions.
Furthermore, before beginning to take any supplements, it is important to seek a lab diagnosis through a blood test for minerals and vitamin deficiencies.