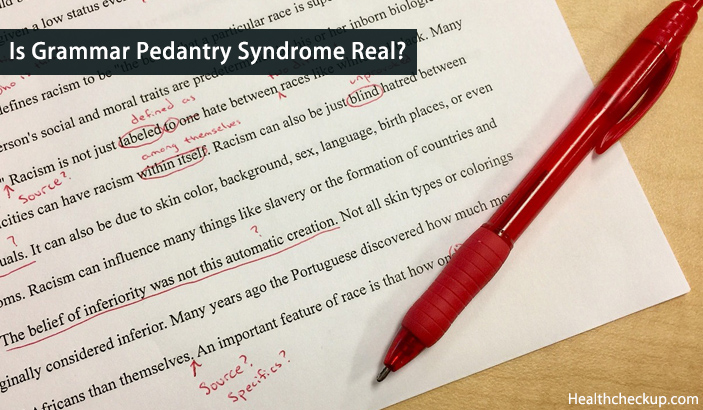 Grammar Pedantry Syndrome: Is It a Real Thing?

They were some high-end caste once. They knew how to make it right; not the whole life, for sure, but the whole texts in this life. You couldn’t misspell anything without bumping into a grammar nazi yelling or CAPSing. They’ve made a lot of jokes about grammar and word usage. Those were funny jokes — once. And then they addled and went sour. But grammar nazis didn’t, they are still around, and lots of us still can’t stop themselves from shaking when someone just can’t see the difference between ‘then’ and ‘than’, between ‘your’ and ‘you’re’. And here comes the new study, which suggests the Grammar Pedantry Syndrome can be a form of OCD!

What is Grammar Pedantry Syndrome?

As it was mentioned above, a Grammar Pedantry Syndrome (GPS) is a syndrome when a person compulsively corrects all language errors made by other people. A person with GPS is the person who always points out menu typos, journalist’s word misusage, any person’s mistake. These are people who just can’t stand when a language isn’t used as it should be. Which makes them great editors and proofreaders, but sometimes also an annoying friend.

Scientists have already proved the existence of the grammar gene, which makes a person unable to use passive voice and complex sentences. As it appears now, this gene has a variant, which makes people compulsively correct other’s mistakes.

How are GPS and OCD Related?

As we know, it’s all about a brain activity. But what a surprise it was when researchers started to watch how grammar pedant’s brain looked like and worked, and saw this:

And the scientists think, that GPS sufferers just feel the language situation out of control and try to fix it and bring it to order.

So, a GPS sufferer simply can’t do anything but to correct other’s mistakes, even when it may be rude to a person he or she corrects. With this condition, people have their own opinion about the language, and it’s based both on grammar rules and their own rules, and the last ones often lack theoretical background. GPS can cause serious social issues, to put it simply: corrects annoy people around them, and they can feel isolated.

There is a general sign of the syndrome: you feel that people who can’t use grammar and spelling right are less intelligent than the others. To look more closely, here is what you absolutely can’t stand or feel really related to:

These stupid cuts, aka SMS language. How long should it take to write ‘how are you’ instead of ‘hru’? And what do these people do with all the spare time? You never understood and never will.

Incorrect punctuation. ‘Let’s eat grandma’, all said. And there are no excuses. People make the pauses when they talk, why can’t they put a comma in the right place? Can’t be forgiven.

Words that sound similar (for those who are not familiar). Yeah, ‘your’ and ‘you’re’ should be so hard to remember. ‘You’re’ means ‘you are’, ‘your’ means, well, ‘your’. But people continue to think it’s the same. Sometimes you feel really need to correct it while it’s written on the wall. Been there.

Everyone thinks you love to proofread. And that’s quite true, but if the person makes same mistakes every time, it starts to annoy big time. So yes, editing and making the world less mistakes place feels good, but it’s not cool when people take advantage of you.

You’re the best in the word games. And that’s the time when your knowledge is very useful since you’re the one who knows what they can or can’t say. And everyone wants you in his or her team. The finest hour!

You learn new words really quickly and ready to use them on go. You just find the right place for a new word and soon you start to feel like it was with you all the time. How come you never knew it before? It’s just so essential.

You re-read your social media posts to ensure they are grammatically perfect. What would people think if they are not? Huge thing. A big symptom of GPS.

When someone makes a grammar joke, he or she becomes your friend instantly. They understand you, how can it happen the other way?

Your pronunciation is just right and great. Perhaps you’ve been speaking English as your first language or maybe you’ve learned it, but you know how to say words, and you know it good.

These symptoms may not look like something you should pay special attention to, but you really should. GPS doesn’t worsen your overall health, but it worsens your psychological state. When the time passes, you’ll become more nervous and compulsive, other OCD symptoms may add up. You don’t want it.

To put it shortly, there is no proven medical treatment for GPS. But the scientists are working on it, and linking GPS to OCD helped big time here.

By now, the best way to treat GPS is to talk to a therapist. Why do you want to make it right so badly? Where does this compulsive need to correct errors come from? Perhaps the answers will change much more than a simple condition.