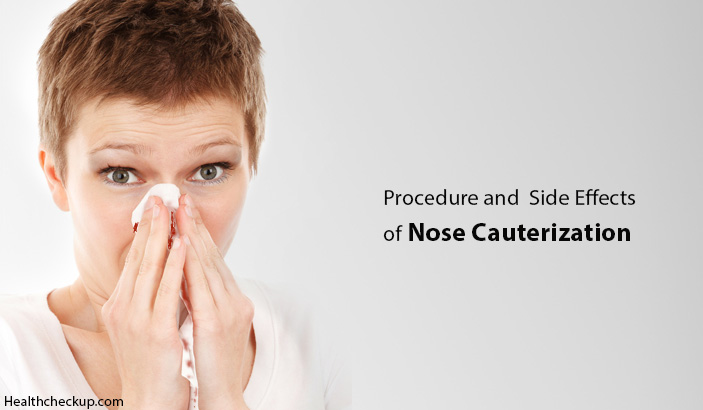 The nose is enriched with blood supply which helps to keep the inhaled air moist and warm throughout its transportation to the lungs. Nose bleeding mostly happens to children and young adults. It is mainly caused by a drying nose, trauma, and infections.

Cases of trauma that causes nose bleeding include heavy sneezing, excessive blowing, nose picking, hard coughing or vigorous activities. Persistent cases of nose bleeding should not be taken lightly. Considering a nasal cauterization is vital. However, one should first understand what it entails and the side effects of nose cauterization.

What is Nose Cauterization?

Nose cauterization is a treatment to curb nosebleeds. It is a painless, fast and effective approach that deals with repeated cases of nose bleeding. Nose cauterization is performed to stop bleeding, close amputation wounds and fight infections. The excessive bleeding occurs from a vein or an artery located at the nose tip.

It is a fast and a minor procedure that requires no prior preparation. However, certain steps are followed to ensure the success of the whole process and to minimize the side effects of nose cauterization. The steps include

In the first 3-5 days of the nasal cauterization healing time, one may feel some pain and itching in the nose. The given pain medicines will help to reduce the pain. Picking, scratching or touching the nose may lead to more nosebleeds.

Does Getting a Nose Cauterization Hurt?

Nose cauterization is not a painful procedure as the patient is put under a local anesthesia. It allows the patient to sleep as well as get numb. A breathing tube is placed in their nose once asleep which helps to decongest the nose. The doctor is able to examine the lining of the nose and determine the primary cause of the nosebleeds. With the information, the physician uses the ant of the cauterization method to seal the blood tissues. It is a painless and an effective method.

Side Effects of Nose Cauterization

The side effects of nose cauterization differ. People have different experiences when it comes to nose cauterization. The throat can turn out to be painful sore and dry after the procedure. Some people experience sinus pains and pressure in the gums and the teeth.

Slight seepage of blood spots are the most common complications that come with nose cauterization. It is bound to go away within the first two days. If that does not happen, further cauterization may be needed to take place to completely seal the blood tissues.

Movements and heavy activities increase the pain after cauterization thus the need to keep calm and partake in less vigorous activities until one is fully healed. Sometimes it becomes hard to breathe through the nose due to fully packed stuffy substances in the nostrils that occur after cauterization.

Taking Care of The Nose after Cauterization

The following are the dos and don’ts after nose cauterization has taken place.

Following up the doctor’s instructions and taking the recommended medicines is a great approach to ensure healing takes place efficiently. In case of continued side effects or bleedings, it is essential to follow up with the doctor to determine where the problem lies.