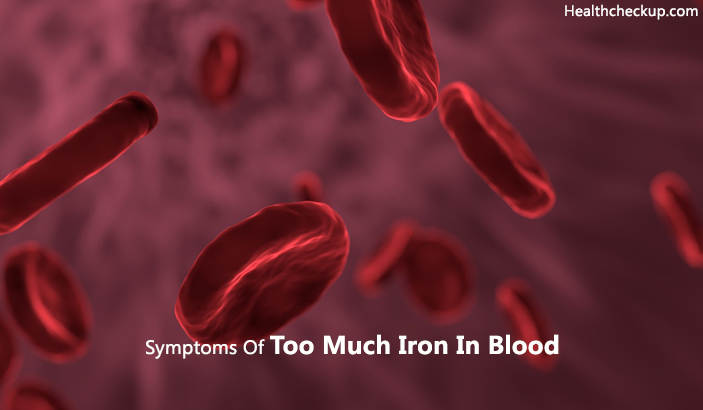 Too Much Iron in Blood – Symptoms, Causes, Treatment, Natural Remedies

Too much iron in blood is not good. When you have too much iron in your blood, the condition is called Hemochromatosis or Iron Overload. In your body, iron is used in the production of hemoglobin which is a critical component in life. Hemoglobin is the red component of blood that is the carrier of oxygen to your body’s tissues. One would think that having more is better, but in the case of too much iron in the blood, you suffer.

What Does Too Much Iron in Blood Mean?

Causes of Too Much Iron in Blood

Too much iron in blood is a condition known to run through families. It is hereditary in some sufferers and acquired in others. Hereditary hemochromatosis is also called Primary Hemochromatosis. It is more prevalent in men than in women. This is because women lose any extra iron that may be in their bodies during their menstrual cycle bleeding. They are also able to lose some amount of excess iron through pregnancy.

In hereditary iron overload, the symptoms often remain hidden until the individual is 40 years old or more. This is due to the fact that iron builds up in the body is a gradual process. Throughout the individual’s life, excess iron will be building up without triggering any symptoms until it reaches a certain amount.

Acquired iron overload is also called Secondary Hemochromatosis. It is often a result of undergoing a high number of blood transfusions, having some blood problems, alcoholism or liver disease. Secondary hemochromatosis has more debilitating effects on your body, but its symptoms show quite fast. It can thus be diagnosed and treated before it damages internal organs and tissues.

Symptoms of Too Much Iron in Blood

Symptoms of too much iron in blood are vague, subtle and can go unnoted. Worse, they are easily attributed to other diseases, condition, and nutrition of the individual. Early iron overload symptoms include

In some cases, frequent urination, heart problems, and pain in your joints or abdomen are what should tell you that you might be having too much iron in the blood.

An analysis of your medical history and a physical exam by your doctor are the first steps towards diagnosing iron overload. If the doctor suspects you might be having hemochromatosis, he will ask for a blood test.

If you are found to have iron overload and there is further suspicion that the condition is Hereditary. You might want to undergo a genetic test together with your family members. This will help identify if your close family is at risk of having too much iron in the blood.

Since hemochromatosis is not a common condition in the general population, many governments and health experts do not screen for it.

Tests For Too Much Iron in Blood

Testing for this condition is done using a number of tests. The ultimate test is the Serum Iron Test. The test measures the amount of iron in a unit volume of your blood serum. The serum is a product of blood. It is what remains once clotting factors and red blood cells have been removed from the blood.

The serum iron test reveals abnormal levels of blood iron. It detects both high and low blood iron levels. The specimen required for this test is blood. So a needle will be used to draw some blood from you. You may be asked by your doctor to fast from midnight, and then have the test conducted in the morning. This is because your blood iron levels are highest during the morning.

Your doctor will often ask for the serum iron test as a confirmatory test. This is after getting the results from another test such as the hemoglobin test or the complete blood count test. If you are on any medications or taking birth control pills, do inform your doctor before undergoing any blood iron levels test.

Too Much Iron in Blood Treatment

After running iron levels tests, your doctor might recommend that you undergo too much iron in blood treatment. Treatment quickly and safely removes the excess iron in the blood, limits the possible complications and progress of the disorder, and prevents organ damage that could result from having too much iron in the blood. This treatment can take a number of routes including;

Dietary changes as treatment for too much iron in blood will involve you eating more iron-rich foods such as red meat, dark leafy green vegetables, molasses, beans and liver meat. Some grains that have high iron content are suitable as well.

Phlebotomy is the common treatment. It is about regularly drawing blood from the body in small amounts such as in blood donation.

Chelation therapy utilizes medicine that helps your internal body systems reduce the amount of iron in your blood.

Natural Remedies For Too much Iron in Blood

A number of home and lifestyle remedies to handle too much iron in blood exist. First, you will want to avoid any supplements or multivitamins that contain iron or boost iron uptake from the food eaten. Alcohol too must leave your table. Turmeric is a great natural remedy to reduce iron build up. It also soothes out inflamed organs.

Turmeric lowers the levels of iron in your blood by acting as a chelating agent. Also called Curcumin, turmeric in its off-the-shelf form is poorly absorbed when taken orally. For the best results in reducing excess iron in the blood, take turmeric topically in a cream that you apply onto your skin or via turmeric capsules that have enhanced absorption.

You may need treatment for the rest of your life, or only for a short period of time until the iron overload clears from your body, but too much iron in the blood is not a death sentence. Life expectancy for those with hemochromatosis is normal if diagnosis and treatment occur early before too much iron accumulates.