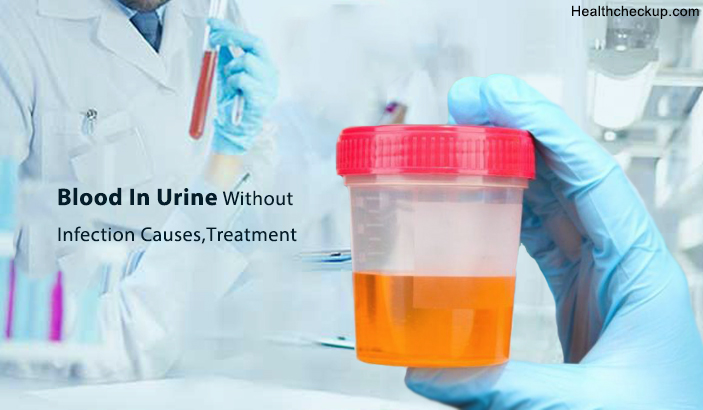 What Can Cause Blood in Urine Without Infection?

Our body is a unique yet complex mechanism complete in itself. While it knows how to process the required and essential nutrients out of the food and beverages we consume, our body also completes the operations by systematically and regularly excreting out the waste products in the form of stool (solid by-product excreted from the body) and urine (liquid by-product excreted from the body). These by-products of metabolism thus hold the key indicators of any issue or problem that the body might face.

Urine mostly is an aqueous solution excreted from the body which is composed of mainly water (more than 95%). Some other constituents of urine include urea, chloride, sodium, potassium, creatinine and other dissolved ions, and inorganic and organic compounds. At times, urine also contains some amount of blood which might indicate some problem. Let us understand what can cause blood in urine without infection?

What Can Cause Blood in Urine without Infection?

While mostly, detection of blood in urine, a condition known as Hematuria, usually is a sign of some serious medical conditions, it is important to understand the causes which can lead to a situation where blood is found in urine. Usually, blood in urine indicates infection in the kidney, bladder, or the urinary tract. However, at times blood in urine can also be found even without any infection. Some of the primary causes where blood can be detected in urine without infection include

At times some pregnant women to complain of blood in urine though no Urinary Tract Infection (UTI) is detected. Some doctors believe that microscopic blood in urine at times is not serious, though it is advisable to contact the doctor regarding such issue at the earliest. This might be an indication of stones in the kidney or some other ailment of the body.

In order to find out the appropriate reason for blood in urine, the doctor would prescribe a urine test where the urine sample would be used to test for signs of an infection, kidney disease or other problems. After studying the results of the urine test, the doctor would then decide the course of treatments. The doctor might further advise undergoing certain other tests of the urine in case the results are non-conclusive at the first instance.

How to Treat Blood in Urine without Infection?

Blood in urine or Hematuria is not something which should be neglected. However, in order to treat the same, the exact cause of such blood in urine should be known to the medical practitioner. Thus, an appointment with the doctor at the earliest is the most important step that one should undertake in case he/she finds blood in urine.

The doctor would advise a thorough urine test in order to find out what can cause blood in urine without infection and then start the appropriate treatment schedule. For example, in case of bleeding due to strenuous exercises, the doctor might need to advise limiting the exercises or not practising heavy exercises till the time the injury heals.