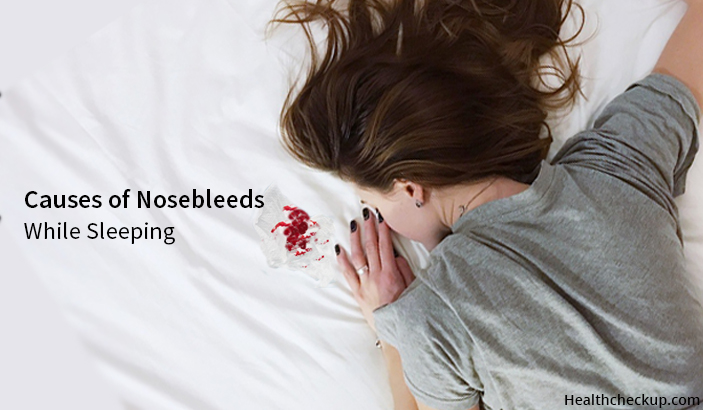 What Causes Nosebleeds While Sleeping?

A nosebleed also referred to as Epistaxis is a condition of bleeding from the nose. During a nosebleed, blood drains out through one or both nostrils.Though nosebleeds are common and can be easily controlled, nosebleeds at night can be scary and overwhelming. Most nosebleeds can be easily managed from home.

Studies claim that only about 60% of people experience nosebleed which in most cases last from a few minutes to 15 minutes or more and can occur at age. Most bleeds are usually light and self-limiting, where only about 10% are serious. According to the American Academic of Otolaryngology, nosebleeds are common in children between ages 2 and 10 and in adult between age 50 to 80.

Epistaxis is common during dry climate or winter due to the increased use of central heating (causes irritation and dying) and increased in the incidence of respiratory tract infections. Below are some of the general factors that cause nosebleeds.

What Causes Nosebleeds While Sleeping

Generally, it’s common to have nosebleeds at night. Commonly this can happen due to different reasons which are not usually serious and in most cases stop on its own. If the nosebleed is frequent or persist, you should get emergency care or visit a doctor. Below are some of the factors that cause nose bleedings while sleeping.

How to Prevent Nosebleeds While Sleeping

What do you when your nosebleeds every morning or how do you prevent bloody nose while sleeping child displays such a condition. Below are some of the things that you can do to prevent nosebleeds.

What Should you do If you Woke Up Nosebleed Middle Night?

Despite the encouraging statistics that nosebleeds are not that dangerous, it should be noted that some are very serious and fatal if not effectively treated. Consult a doctor in case of an alarming nosebleed.