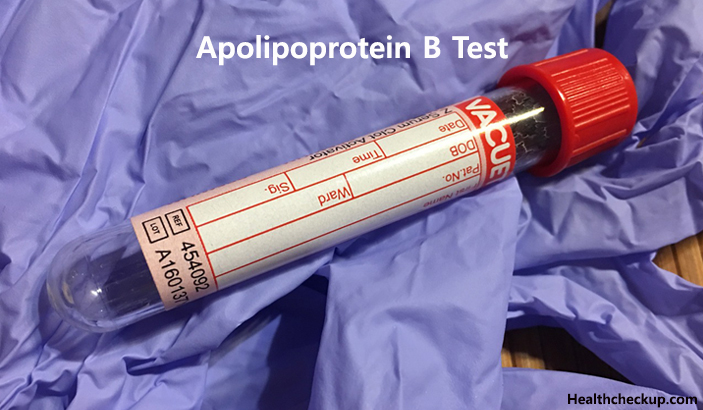 Apolipoprotein B test(ApoB) is an essential test which is a constituent of various lipoproteins which are involved in cardiovascular disease and atherosclerosis.
The chronic inflammation in the arterial wall is known as atherosclerosis. It is triggered by a complex relationship between white blood cells (macrophages), lipoproteins, immune system and arterial wall normal elements.This method causes the atherosclerotic lesions or plaques formations which might project into the lumen of the artery leading to narrowing of arteries that mighteventually limit blood flow.If this happens in the coronary arteries, this might lead to angina pectoris and if it occurs in the arteries of the legs, it might lead to claudication.

Rupture of an atherosclerotic plaque may lead to thrombosis (blood clotting) causing an acute occlusion (blockage) of the artery. If this happens in a coronary artery it may cause an acute myocardial infarction (acute heart attack). Elevated cholesterol levels is one of the factors which contributes to atherosclerosis.

In humans, increased plasma cholesterol levels seems to be an main contributor to atherosclerosis, even though the threshold level of plasma cholesterol which must be surpassed to produce clinically relevant disease seems to be far lower than compared to the animal models, and this is because lesion formation happens over many decades.

Myocardial infarction which is classified under atherosclerotic clinical events are not common in the population who have lifelong very low levels of plasma cholesterol. Cholesterol cannot be transported in blood on its own, as fats are insoluble in water. Hence, the solution by the body to this issue is to bind few proteins and cholesterol which functions as transport vehicles which carries many types of fats like triglycerides, cholesterol and phospholipids. Lipoproteins are generally the combination of proteins and fats.

It is significant to highlight, that it is lipoprotein which act together with the arterial wall and initiate the force of events which causes atherosclerosis.Cholesterol is only one of many components of lipoproteins. As a result, amounts of total cholesterol gives less information about the lipoproteins which transports cholesterol bulk.

Low density lipoprotein cholesterol (LDL-C) and CVD risk both in men and women has a strong graded relationship and this has been argued by few of the investigators.
Amounts of the LDL-particles (LDL-P) number seems to be more analytical of risk than the quantities of the cholesterol bulk within these particles or LDL-cholesterol (LDL-C).

Even if LDL’s appear to be the most atherogenic particles, most important thing to be remembered is other apoB and VLDL comprising lipoproteins might also be a reason of contribution to atherosclerosis.

ApoB happens in 2 main forms, that is apoB 48 and apoB 100. ApoB 48 is producedmostly by the small intestine. ApoB 100 is the apolipoproteinpresent in lipoproteins produced by the liver. Consequently, from atherosclerosis and cardiovascular risk viewpoint, apoB100 is the major one. ApoB 48 is chiefly found in chylomicrons.

ApoB 100 is present in chylomicrons, LDL, VLDL, and LP(a) particles. Basically these particles are atherogenic. All of these particles comprises a single apoB molecule. As a result, measurements of apoB signify the total burden of the main lipoprotein particles involved in the process of atherosclerosis.

Typically, 80-90% of apoBcharacterise LDL particles. Therefore, apoB replicates particle concentration, comparable to LDL-P. Although amounts of apoB are not extensively available, the assay has been consistent and does not need a fasting sample.

Manystudies have shown that apoB might be a better indicator of risk of cardiovascular disease compared to LDL-C. Moreover, it has been proved that apoB may be increased even though there are low or normal concentrations of LDL-C. ApoB also seems to indicate on-treatment risk, when LDL-C has been decreased by statin therapy.

Indisputable data support the thought that apoB is a better tool to measure cardiovascular disease than non-DHL-C and LDL-C.

Additionally, apoB seems to be a very important factor in measuring cardiovascular risk in the diabetes and metabolic syndrome setting, since patients with these conditions incline to have dense, small LDL particles with comparatively normal LDL-C nonetheless high levels of apoB.

In addition, many clinical trials have proven that apoB is animproved marker for checking patients on statin therapy for residual risk than LDL-C.

The apoBnormal range is 40-125 mg/dL.Typically less than 100 mg/dL is considered necessary in low or intermediate risk individuals. Less than 80 mg/dL is needed in people with high risk like those with diabetes or cardiovascular disease.

Increased apolipoprotein B (apoB) levels predict an elevated risk of cardiovascular disease. ApoB levels might be increased during pregnancy or coffee consumption, and during the fall and winter seasons.
A very rare genetic disease called Bassen-Kornzweig syndrome (abetalipoproteinemia), might be indicated by low apoB levels as this is characterized by apolipoprotein B deficiency.

Additional Conditions which are Related with low apoB levels Include the Following:

How to Lower ApoB

Most of the doctors will suggest the same general methods to lower apoB as they do for reducing LDL-C. Hence, lowering the amount of cholesterol and saturated fats is often suggested together with increased consumption of fibers, vegetables, and mono-and polyunsaturated such as omega-3 fatty acids.

In lowering the apoB, physical exercise has proven to work and it also positively affects the apoB/apoA1 ratio, nonetheless LDL-C effects seems to be much smaller.ApoB levels can be lowered by statins that is characterized under cholesterol lowering drugs.