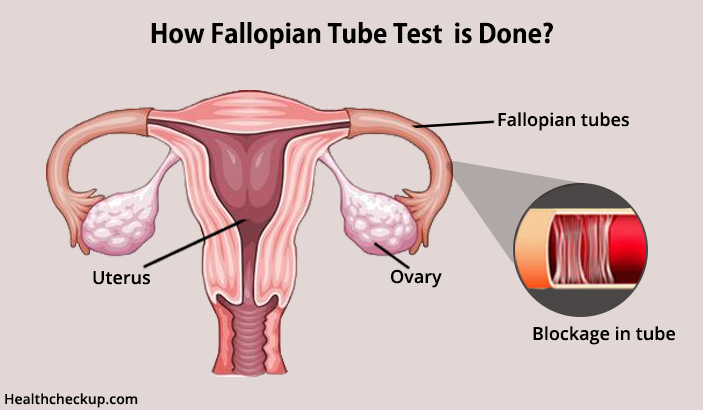 Blockage can occur in one or both fallopian tubes. Some of the causes of the blockage are

Pelvic Inflammatory Disease (PID): PID is one of the main cause of blocked fallopian tubes. PID means collective inflammatory issues which causes the female reproductive system by making blockage and damage to the fallopian tube. PID is due to sexually transmitted disease(STD), and not every pelvic infection that are related to STDs.

Surgery Complications: Complications due to surgeries that include the uterus and fallopian tubes like a miscarriage, C-section, and abortion also causes a blockage.

Ectopic Pregnancy: Occasionally, fertilized egg are implanted in fallopian tubes which do not allow to travel through the uterus which results in tubal pregnancy. A woman who has previously experienced an ectopic pregnancy, she is most likely to develop a higher risk of scar formation that leads to fallopian tubes blockage.

Endometriosis: Endometrial cells are normally found outside the womb, so if endometriosis is experienced without shedding during menstruation, then this can lead to blockage. Endometrial tissue creates scars and adhesions due to the physical pressure. This in turn causes the fallopian tube blockage. Hence, allowing to stop tubes by taking ovary released eggs from the ovary.

Infections: Infections, including Sexually Transmitted Infection (STI) like gonorrhoea and chlamydia and any other infection caused by miscarriage, abortion which causes fallopian tube blockage.

Tubal Ligation Removal: Tubal ligation, a prevalent birth control method, is detached when the couple wishes for a baby. The odds of blockage of the fallopian tube are high in this case since the scar tissue which is made after the procedure.

Ruptured Appendix: Suppose the woman has ruptured appendix as medical history then there is a great risk that the infection can affect the fallopian tube blockage.

Blocked fallopian tubes symptoms are very rare. The symptoms include

What is Blocked Fallopian Tube Test?

The most common cause of female infertility is blocked or damaged fallopian tubes. It becomes difficult to detect the blockage in the fallopian tubes by simple physical examination. Due to this, blocked fallopian tube test, also known as Hysterosalpingogram (HSG) is performed.

This outpatient test aids the doctor get a quicker look at the fallopian tubes. It is virtually continuously ordered as a part of an infertility panel test. The fallopian tubes are an essential part of a woman’s reproductive system and any damage or disease in them may leave them impracticable.

What Does The HSG Do?

The test can also reveal to the physician where exactly the blockage is and how severe it is. It tells whether the shape of the uterus is normal or not. In almost 20% to 25% women who experience recurrent loss of pregnancy, the problem is qualified to an abnormally shaped uterus. Surgery can help to treat these abnormalities.

How Is An HSG Done?

X-ray clinic performs the fallopian tube test. The patient will be made to lie down on an examination table, and a swift pelvic exam will be done. The physician will insert a speculum into the vagina and will insert another device called a Cannula.

An iodine based dye is injected into the vagina via the cannula. Instead of using a metal cannula, most physicians today use a sterile throwaway plastic catheter that is safer and less painful.

Once the dye is injected, the doctor will take X-Ray images of the pelvic area. Along with a delayed film, 3 separate images will be taken. The delayed film is performed by removing the catheter, asking the patient to walk around, and then repeating the X-ray. This lets the physician check that the dye has dripped into the pelvic cavity routinely. The detailed images will allow the doctor to tell if there is any blockage in any portion of the fallopian tubes.

Is it Possible to get Pregnant with a Blocked Fallopian Tube?

Normally if one fallopian tube is blocked and the other tube is free from blockage then it is possible to achieve pregnancy. It totally depends on how the ovaries are functioning overall and what were the causes of fallopian tube blockage.

The fallopian tubes can occasionally become damaged or blocked because of certain problems that a woman may suffer from. In very rare cases, the fallopian tube blockage may have been there since birth as a birth defect, which has been not detected until the woman reached parenthood and tried to conceive.

The best doctor should be consulted and a suitable treatment plan must be taken to enjoy healthy pregnancy and motherhood.