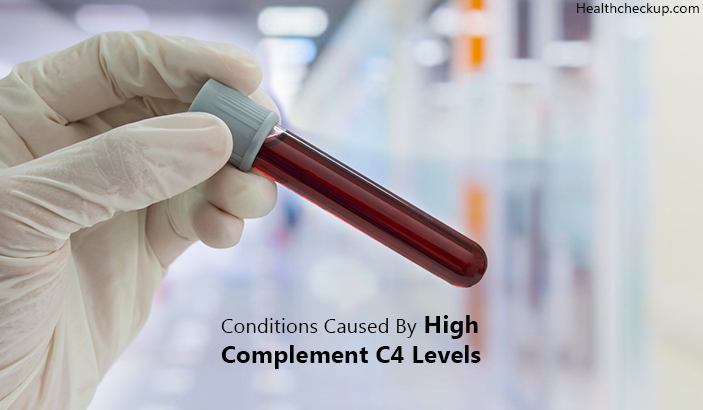 What Does It Mean To Have High Complement C4 Levels?

What Is The Role Of The Complement System?

The complement component 4 (C4) assay is a test used to detect the quantity of C4 complements present in human serum or plasma. It is produced in the liver and some white blood cells.

The function of the complement system is therefore not to just kill harmful pathogens but it also contains essential regulators and activators which provide us humoral and cellular immunity.

When Is A C4 Complement Test Advised?

A complement C4 test may be advised if your doctor suspects you of having an auto-immune disorder with signs and symptoms such as:

The complement C4 test may also be advised if you diagnosed with some kidney disease or a liver disorder such as hepatitis.

The test may also have to be repeated serially for the purpose of monitoring the progress of autoimmune disorders, liver or kidney disorders or to assess if the treatment is working beneficially.

Often, both C3 and C4 complement tests are usually advised together. This is because in certain diseases both complements C3 and C4 are low, while in some, one may be low and others are high or normal.

Some other tests may also be advised along with complement C4 test to assess the general immune status such as:

What Does A High Complement C4 Test Result Mean?

Normal Reference Range: 16 – 48 mg/dl
Complement C4 test result greater than the upper limit (more than 48 mg/dl) mentioned in the reference range is considered to be abnormal. Low complement C4 levels are often seen in autoimmune disorders or when there is an interference with C4 complement production such as liver diseases.
Low levels of C4 complement are associated with an increased risk of developing infections and autoimmune diseases.

C4 complement levels can rise in cases of trauma, injury or infections where there is the release of inflammatory mediators.

Complement activity tends to vary throughout the body. Yet, significantly high complement C4 levels may be present along with other markers of inflammation (ESR, CRP, and homocysteine) in conditions such as

Both of these are chronic inflammatory bowel diseases

Inflammatory conditions of the skin such as psoriasis, urticaria (hives) and dermatitis

Develops as a result of untreated strep throat which can also affect the heart, brain, skin, and joints as a course of the disease or its complication.

Such as cimetidine can increase complement C4 levels

High levels of complement C4 in the blood can be deleterious for the overall functioning of the human body. High complement C4 levels can cause the following

A study conducted over 3000 individuals supported the theory that high complement C4 levels were associated with a higher risk of developing metabolic syndrome.

An observational study conducted included 5850 men, showed an association between high complement C4 levels and an increased risk of heart attack and stroke over a follow-up period of 18 months.

Complement C4 test helps to determine if the presence of an immune disorder is due to its deficiency. If high complement C4 levels are not due to some major medical condition, the levels can be reduced effectively by following an appropriate diet and lifestyle which in return controls chronic inflammation. Some common measures include:

Yet, if complement C4 level is found to be raised, it cannot be considered as a ‘stand-alone” parameter to definitively a medical condition. Your doctor may advise you a different set of tests focusing on the probable diagnosis for high C4 levels and provide suitable treatment options for the underlying condition.