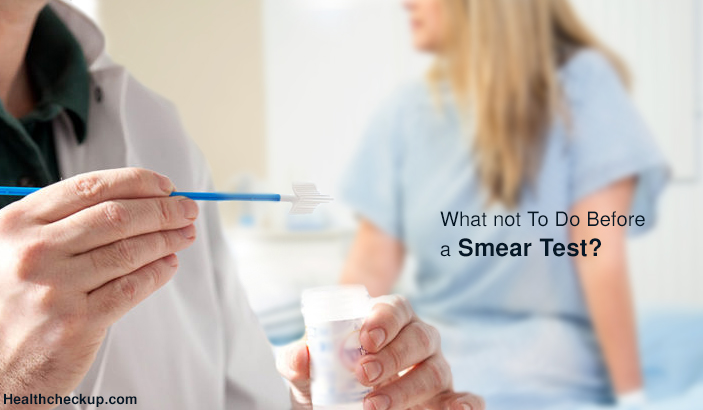 What Not To Do Before A Smear Test?

Cervical cancer is prevailing cancer and it is the 4th most common cancer among women worldwide. It is also the second most common cause of death from cancer in women. It can be effectively cured if detected early at the premalignant lesion. Because it takes about 10 years to transform into the malignant stage after going through a pathological process called Dysplasia.

Cervical smear which is also known as Pap smear test is currently practised as an efficient non-invasive screening test to detect the premalignant lesions of cervical cancer. The incidence of this cancer has reduced by more than 50% in the past 30 years, largely due to the use of a cervical smear test. The screening should be started at the age of 21 and should be continued until 65 years, once every 5 years. There are many indications where the pap smear needs to be done, along with few instructions that are coming under what not to do before a smear test.

Usually, the test is not done when the woman is having her menstruation, because red blood cells interfere with the smear interpretation. Also, it is uncomfortable for the woman to undergo the procedure when she is having her menstrual period. So it is best to perform the test one or two weeks after the period or five days before the expected date of menstruation. Do not insert tampons into the vagina 48 hours prior to the test.

Pap smear is performed as an outpatient procedure and there is absolutely no need for admitting the patient. Before the test, the procedure should be explained to the patient. The purpose of the test should be clearly stated so that the woman will understand the importance of the information the clinician can gather after the procedure.

The clinician should ensure the privacy of the patient, having a chaperone in the examination room. The set of equipment which is needed for the procedure should be disinfected and gathered beforehand. 3 slides should be available at the examination room to prepare the smears soon after the samples are taken. An adequate amount of 90% of alcohol should be ready to fix the smears.

Pap smear etiquette is a common scenario experienced by most of the women undergoing the test. The easiest way of solving this problem is the clinician explaining the procedure in detail to the woman. The discomfort she might feel during the procedure should be clearly stated in this explanation. Presence of a chaperone will also reduce the woman’s nervousness and fear during the procedure. The steps of the procedure are as follows.

Informed verbal consent should be taken. Then the patient is put on to the lithotomy position.

[Read – What Causes An Abnormal PAP Smear Test]
Cervical smear should be promoted among women as an effective method of screening women for cervical cancer. Grooming for the test includes giving information to the woman, on what not do before the pap smear test as well as clinician preparing the tool kit for the test.