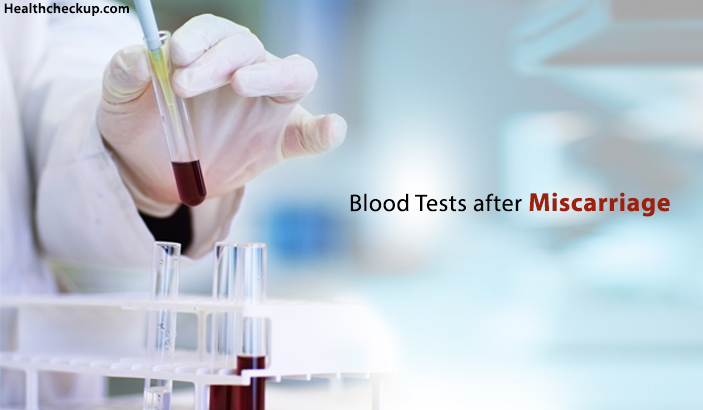 List Of Blood Tests To Be Done After Miscarriage

Miscarriage is a commonly used term for loss of pregnancy. About 1 in 6 pregnancies end as miscarriages; the incidence of early clinical miscarriage being about 10-15% and the risk significantly increases with advancing maternal age.

Although miscarriage is a fairly common occurrence, it can be physically, mentally and emotionally, a challenging phase for any women who experiences it. Yet, these women do go on to achieve a healthy pregnancy later on.

Miscarriage can either be spontaneous or induced. It can also be divided into two basic types:

Types of miscarriages can be explained under the following headings

Septic abortion can be easily differentiated from other types of miscarriages due to associated signs and symptoms of sepsis such as fever with chills, persistent vaginal bleeding, foul-smelling vaginal odor, and pelvic region pain, discomfort and tenderness.

A variety of external as well as internal factors may be responsible for miscarriage. Some of the common causes for miscarriage are mentioned in brief below:

Signs And Symptoms Of Miscarriage

Most miscarriages occur during the second or the third month of pregnancy, which is also called the first trimester of pregnancy. Some of the signs and symptoms suggestive of miscarriage are

It is important for pregnant women to understand alarming signs and symptoms of a miscarriage so that they can confirm a miscarriage at home even before going to the doctor for a blood test or an ultrasound to get an affirmative diagnosis of miscarriage.

Once the patient has reported one or more of the alarming signs and symptoms of miscarriage, blood tests, as well as an ultrasound of the abdomen and pelvis or transvaginal ultrasound, is advised to confirm a miscarriage.

This is a basic hematological test done after a miscarriage. A complete blood count gives details about

HCG blood test for this hormone is done often even before confirming a miscarriage via an ultrasound.

If a woman has experienced recurrent miscarriages, that is loss of pregnancy two times or more, the female along with her partner is suggested to undergo chromosomal tests to understand if the miscarriages occur due to chromosomal abnormalities.

After miscarriage has occurred, a woman can resume her regular routine within a couple of hours or a few days depending upon her physical strength. Yet, there are certain measures which women must undertake which ensure faster recovery with lesser complications, such as

[Also Read: Precautions To Be Taken During Early Pregnancy]

Women can also take oral contraceptives by prescription for the first month following a miscarriage to avoid pregnancy immediately, or as advised by the gynecologist.
Miscarriage is a physically and emotionally stressful period for any woman. However, that doesn’t make the chances of having a successful pregnancy bleak. Adequate rest, care and a healthy, nutritious diet will ensure quick recovery after miscarriage.