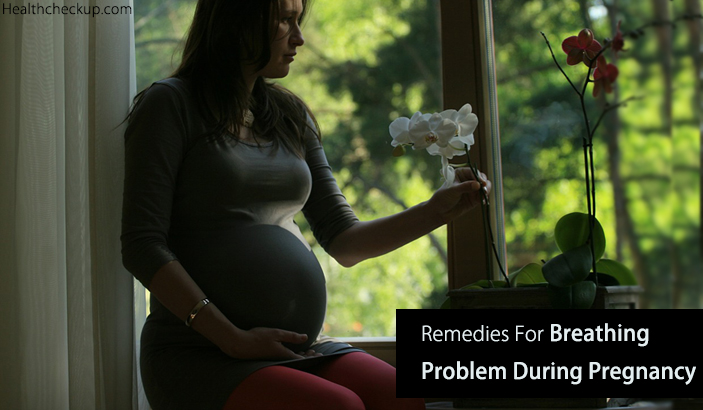 Remedies For Breathing Problem During Pregnancy

Pregnancy is the most beautiful phase of human existence. This is the phase when nature enforce that we are capable of doing the impossible, i.e., giving life to a new creature. However, during the process of giving this new life, the mother usually goes through a lot of highs and lows. But she overcomes them very bravely just to bring a new life into this world and nurture it to become a healthy adult gradually so that the life processes can continue without disruptions.

One of the issues which the pregnant mother often has to face is the issue of Breathlessness. However, it is important to understand that this is merely a phase and not a permanent thing. Understanding and following the remedies for breathing problem during pregnancy would not only make it easy and uncomplicated for the would-be mother but it is ought to make the journey even more beautiful.

What Causes Breathing Problem During Pregnancy?

Though felling breathless during pregnancy is common. It is better to consult with your gynecologist in order to understand the specific reason for such breathlessness given your health conditions. However, the issue of breathlessness is quite common during the entire journey of pregnancy.

Uterus Size  – Shortness of breath during pregnancy can also be the result of increasing size of the uterus which taken more space in the body thus pushing against the diaphragm (muscle below the lungs) of the pregnant mother. This increases the problem of breathlessness or problem in breathing during the sixth month of pregnancy and can continue for the entire last trimester.

This essentially does not mean that the body is getting less oxygen. Due to the upward push from the uterus, the lungs get the smaller area in the body and thus need to work that extra mile. This, however, improves once the baby drops lower towards the pelvic region during the time just before delivery of the baby.

Blood Flow Volume – The body of the pregnant woman also expands the volume of blood flowing through the body so that both the mother and the baby can get enough oxygen. Thus, the feeling of breathlessness is common during pregnancy.

However, in case the breathlessness starts all of a sudden accompanied with pain, coughing, heart palpitations, and wheezing and if the situation worsens over time, one should not take any chance and seek medical assistance as soon as possible. These might be because of some reasons other than pregnancy. Sometimes, breathlessness is a warning sign for other problems or issues such as Asthma, Anemia, or Persistent Cough.

Remedies For Breathing Problem During Pregnancy

Though breathlessness is a common phenomenon during pregnancy, symptoms should not be neglected. Pregnancy is a delicate journey. Taking due care at the right time can avoid bigger problems. It is advised to check with a practising medical practitioner and follow suggested remedies for breathing problem during pregnancy to enjoy the journey of motherhood hassle free.