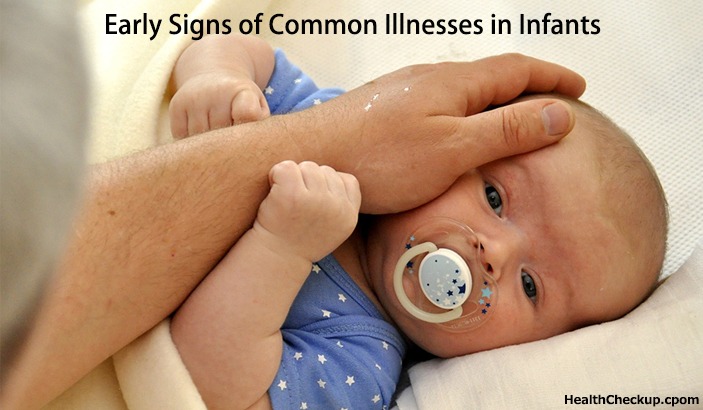 Mother’s love is the purest love. For a mother, nothing is as important as seeing her baby’s happy face and in good health. Only a mother knows better than anyone else how a child is usually like and only she will understand when the child is ill. The new born children are most susceptible to bacterial infections. Before running into a doctor for the slightest temperature rise, there are several early signs of common illnesses in infants can observe. Understanding the signs and depending on the activity of the child, medical examination needs to be done.

Of all early signs of common illnesses in infants that can be detected is the behaviour change in the child. Change in activity level or continuous crying of the baby is one of them. Lethargy and irritability predominantly shows that the illness is present in the body.

Jaundice is caused by elevated levels of bilirubin in the blood. Neonatal jaundice is most common and appears about two to three days of the birth of the child and disappears by two weeks. The colour of the skin turns slightly yellowish. The colour change occurs first at the head and the face slowly reaching to the chest and the stomach. However, if the baby has a darker skin tone, the change in the skin colour can be seen in the whites of the eyes, on the soles of their feet.

If your child turns blue, it indicates that your child might have breathing problems. This situation is called as central cyanosis. It results in a grey or blue discoloration of the skin. However, the central color change of the body needs to be looked at, not just brief changes in the fingers or toes. Another, problem is wheezing. It is a whistle sort of high pitched sound made when your baby exhales. If your kid has no history of wheezing, it is important that medical consultation is immediately sought. When a baby inhales and exhales, a spot in the middle of the chest sinks in, this is known as retracting.

If all the ribs of the child can be visible barely few feet away, it is indicative of the early sign that the child is suffering from respiratory distress.

Fever is the most common illness found in babies. It generally improves with proper medication and rest and goes away without much harm to the body. The body temperature needs to be measured to detect fever. Temperature above 38 degrees centigrade in a child under three months and temperature above 39 degrees centigrade for child between three and six months must be taken to the doctor. If your child has fever for more than three days, immediate consultation with the doctor must be sought. However, fever is the most serious for babies under three months.

Symptoms
Temperature shows the early sign of illness the child is suffering from.

Diarrhoea can be the main causal factor behind the child suffering from dehydration. If the child suffers from severe diarrhoea, babies tend to be quickly dehydrated. The body loses the water and the necessary electrolytes required for the body to function properly.

Babies crying at regular intervals are a normal thing. However, babies crying inconsolably may be a cause of concern. It is due to a condition called colic, where babies cry non-stop. Colic starts shortly after birth and may continue for the first six weeks of life. Early signs may show irritated behaviour. In some cases, the babies may even be jittery or tremble. Incessant cry of the baby with irritability may signal that the baby might be suffering from a viral infection, ear ache or abdominal pain. These early signs might show that something is serious and the kid needs to be examined by the doctor immediately.

These illnesses often occur in newborn babies and most of them like fever, jaundice and dehydration are common. A mother’s concern, when her child is ill is understandable. But, it is very important that one stays calm and not panic. Self-medication must be strictly restricted and the baby needs to be taken to the doctor or emergency room if the situation turns dire. And most importantly, the early signs of common illnesses in infants must never be overlooked.