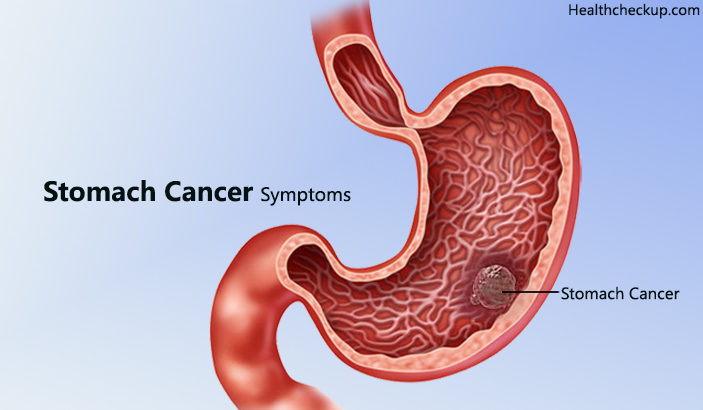 Stomach cancer is also known as Gastric Cancer is characterized by the growth of cancerous cells in the stomach lining. Stomach cancer is among the most difficult cancers to diagnose since it shows no symptoms in its earlier stages. In some instances, an individual with cancer may mistake the symptoms for other common illnesses like stomachaches and stomach virus.

Stomach cancer forms when healthy cells in the upper digestive system became cancerous and develop out of control thereby forming a tumor. The process, however, happens slowly over many years. Stomach cancer is more common among men, smokers, adults 55 years and older, and individuals with a cancer history in their family among others.

What Are The Most Common Symptoms of Stomach Cancer?

Since stomach cancer develops slowly, it is very hard to detect any symptoms in the early stages. However, it’s possible to be detected easily when the malignant tumor develops. Stomach cancer is also known to be one of the most painful cancers. This may happen because as the tumor grows, it presses on the nerves causing pain and in the process interfering with other organs. Below are some of the common symptoms of stomach cancer for both female and males.

Some of the Advanced Symptoms of Stomach Cancer Include

The earlier the cancer is detected, the better because it’s more likely that the treatment will be successful. Therefore, if you are concerned about any symptoms that may be associated with stomach cancer, please visit a doctor. The doctor will be able to help figure out the cause of the problems.

How Common is Stomach Cancer?

Stomach cancer is not very common. Usually, about 1 in about 111 adults will develop gastric cancer. According to Dr. Sarpel of the American Cancer Society, an individual’s risk for stomach cancer gets higher as they age. Also, it is more common in men than women.

Gastric cancer is about the 16th most common type of cancer in the UK. Also, about 6,700 Brits per year are diagnosed with it.

Unless there are many people in your family that have stomach cancer, you should not be concerned a lot that you can inherit the disease. In most cases, gastric cancer is caused by DNA mutations. However, if you experience symptoms, it’s important to check for stomach cancer. Other causes include

Even though there is a decrease in the number of cases of stomach cancer (by 48%) since 1990’s, there is only a survival rate of 15%. According to the National Cancer Institute, below is a 5-year survival rate for gastric cancer patients.

Stomach cancer can be detected by

Ultrasound is used to stage your disease.

Usually, treatment for stomach cancer depends on a number of factors; they include the stage or severity of cancer, age, and a person’s overall health conditions and preferences. Treatment may include chemotherapy, surgery, medications, radiation therapy, and clinical trials among others.