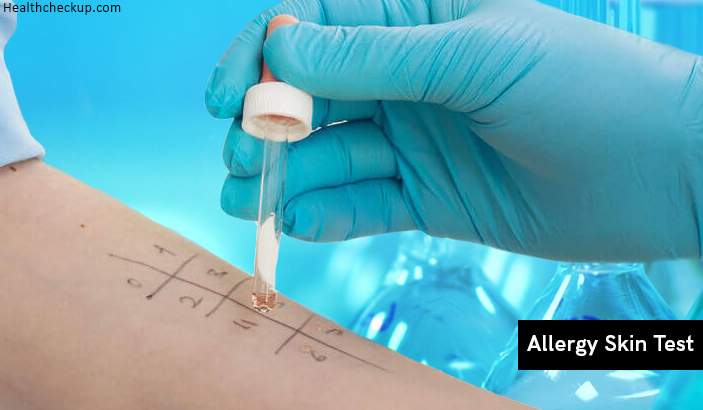 Allergy skin tests are done by exposing an individual’s skin to any substance that is deemed to cause an allergic reaction to their skin. The allergy causing substances are known as Allergens. When the skin is exposed to these allergens it is examined for reactions which can be termed as allergic ones. Allergy skin tests result interpretation helps to determine if or not a certain substance or allergen an individual comes into contact with, breathes in or has ingested is the cause of the allergic signs. The results once interpreted by the examining doctors may assist them to come up with the best allergy treatment.

The doctor may advise an individual to avoid coming into contact with any kind of allergens, medications that cause the same, or therapies such as Immunotherapy Injections. The allergy skin tests are mostly for assisting the doctors to diagnose the underlying allergic conditions.

Allergic ailments from being exposed to allergens may be such as allergic asthma, Eczema or Dermatitis, Allergic Rhinitis or Hay fever. Allergies caused by certain foods ingested penicillin allergy, venom from the Bees allergies, and allergy from latex.

Allergy skin tests are mostly used in the diagnosis of allergies that are airborne. For example, pollen, pet dander, and dust mites, food allergies are also detected this way.

The skin scratch test or skin prick test which also goes by the name of a Puncture Test. The test is used for checking for sudden allergic reactions as many as up to 40 allergens. Mostly it is for testing allergies that crop up due to allergens such as, pollen, mold, pet dander, dust mites, and foods. It is done on the forearm for the adults, while children have it done on their upper backs.

Since allergy skin tests are not at all painful when it comes to this type of allergy skin test needles or lancets that hardly enter the epidermis. One does not bleed or but they only have some slight discomfort. The area where the test is to be done on is cleaned using alcohol, then small drawings are made on the skin. A drop of the allergy causing substance I applied besides each mark. A needle is used in this case to ensure that the allergen is pierced into the surface of the skin. For each allergen being tested a new needle is used.

This test uses a needle to inject a tiny amount of allergen into the skin of the forearm. Also known as the Intradermal Test. It is also examined within a period of 15 minutes for any signs of allergic reactions. Mainly done for examining allergic reactions from insect venom or penicillin.

Patch test is carried out mainly to determine whether a certain substance is leading to the occurrence of allergic skin irritation or contact dermatitis. Patch allergy skin test is for examining allergic reactions which are delayed and do not happen immediately and can even take long as days for them to crop up.

How to Prepare For An Allergy Skin Test

How To Do Allergy Skin Test

For a patch allergy skin test, there is no need to use needles instead the allergens are done on patches, the patches are then put into contact with the skin. About 20 to 30 different allergens that can lead to the contact dermatitis condition are tested. Some of these allergens include latex, drugs, fragrances, preservatives, hair dyes, metal, and gums.

A person has to stay with the patch on their forearm or their backs for a period of 48 hours. They should avoid bathing or engage in activities that may lead to heavy sweating. The doctor removes the patch which may show some kind of an allergy.

[Read – Treatment For Sweating in Hands and Feet]

For the skin injection allergy skin test in order to determine the normal reaction of the skin from allergens, two more allergens are pricked into the patient’s skin surface. They are namely

The test is given fifteen minutes then observed for any allergic signs. The existence of allergies due to any of the above allergens leads to the development of a raised itchy bump or wheal that is red in colour and resembles one from a mosquito bite. The size of the bum is then measured. The results are then recorded down and the area of the test is cleaned using alcohol.

[ Read – What Causes Itchy Bumps on Skin Like Mosquito Bites ] 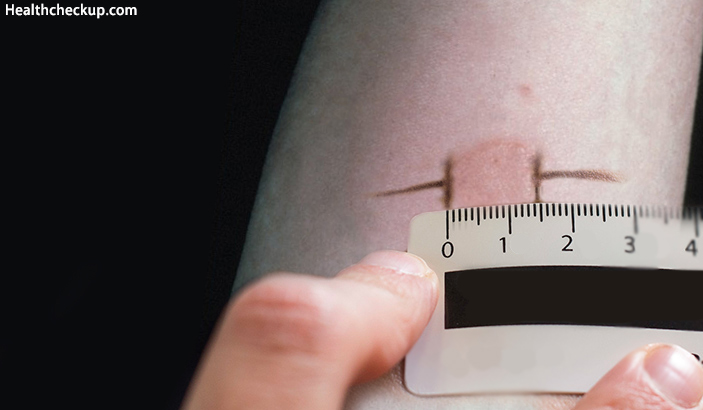 They are Recorded Down as Follows

Itchiness – The test may lead to mild itchiness of the skin, the skin turning red, and at times the skin may become swollen. Tiny bump-like wheals may occur on the skin’s surface.

Sickness – Feeling sick after an allergy skin test may be an indication that a person is suffering from the side effects of the test. Creams should be used to stop all this.

The effects may be felt for some hours up to some days. Some creams are used to alleviate these effects. Though not common, the side effects may be in the form of a sudden extreme allergic reaction that may need one to seek further treatment.

How Long does An Allergy Skin Test Take?

A person has to stay with the patch on their forearm or their backs for a period of 48 hours. This is for the patch allergy skin test. For the skin injection allergy skin test, the test is given fifteen minutes then observed for any allergic signs.

Allergy skin test results numbers are the numbers against which the results of the test are compared to in order to give the correct diagnosis.

Allergy skin tests should be done by specialists only to prevent the side effects from being extreme and life-threatening. The tests are useful in determining the allergens that are harmful to a particular individual.