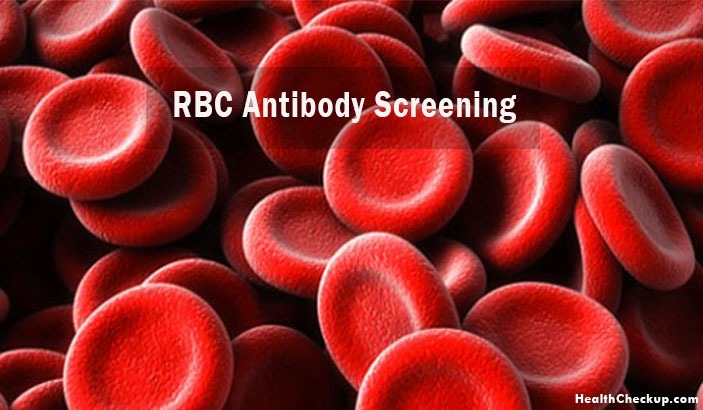 What is RBC Antibody Screen Blood Test? Procedure and Results of Test

Red blood cells, most commonly known as RBCs, carry a number of protein and carbohydrate antigens on their surface. There are over 600 antigens, which are separated into 30 blood group systems. The presence or absence of these antigens in an individual is important because they determine the type of blood that should be given in case a blood transfusion becomes necessary.

If a person is exposed to blood with different antigens other than that person’s own, he or she may form antibodies that can result in extravascular or intravascular hemolysis when the recipient may be reintroduced to the same antigens in a future transfusion.

Antibody screening is routinely used in conjunction with typing and crossmatch before the administration of blood products, especially RBCs, to avoid transfusion reactions and to prevent notably decreased survival of transfused RBCs. It is also used in antenatal screening to detect the presence of antibodies in a pregnant woman’s serum that could result in hemolytic disease of the fetus and newborn.

When is the RBC Antibody Screen Blood Test Done?

An RBC antibody screen is used to screen or check any person’s blood for antibodies directed against red blood cell (RBC) antigens other than the A and B antigens. It is performed whenever a blood transfusion is anticipated or required. If an antibody is detected, then an antibody identification test must be done to determine which antibodies are present. During a crossmatch, a variation of the RBC antibody screen is performed if clinically significant antibodies are present. In the case of blood transfusions, the RBC antibodies must be taken into consideration and a donor blood must be found that does not contain the antigens to which the person has produced antibodies.

If a person has an immediate or delayed reaction due to a blood transfusion, the doctor will order a Direct Antiglobulin Test (DAT) to help investigate the cause of the reaction. This test detects RBC antibodies attached to red blood cells. An RBC antibody screen will be performed to see if the affected person has developed any new antibodies if the DAT is positive.

Why is the RBC Antibody Screen Blood Test Done During Pregnancy?

During pregnancy, the antibody screening is used to screen for antibodies in the blood of the mother. There are chances that the antibodies might go through the placenta and attack the baby’s red cells, causing Hemolytic Disease of the Newborn (HDN). The most serious cause known is an antibody produced in response to the RBC antigen called the D antigen in the Rh blood group.

What is Rh in Blood Test?

What is Rh positive and Rh Negative?

If an Rh-negative mother has a negative RBC antibody screen, then an Rh immune globulin injection is given within 72 hours to prevent antibody production. If the mother tests positive, then the antibodies present must be identified. If an antibody to the D antigen has been actively formed by the mother, then the RhIg injection may not prove useful. If she has a different antibody, then the RhIg injection can still be given to prevent her from producing antibodies to the D antigen.

It’s important to know if you have any RBC antibodies early in your pregnancy to help your baby avoid problems like anemia or jaundice. If the problem is found, therapies are available for the problem.

What else is the RBC Antibody Screen Blood Test Used For?

The RBC antibody screen test may be used to help diagnose autoimmune-related hemolytic anemia in conjunction with a DAT. This condition may be caused when a person produces antibodies against their own RBC antigens. This can happen with some autoimmune disorders such as systemic lupus erythematosus, with diseases such as lymphoma or chronic lymphocytic leukemia, and with infections such as mycoplasma pneumonia and mononucleosis. It can also occur in some people who use certain medications such as penicillin.

What do the RBC Antibody Screen Blood Test Results Indicate?

If the RBC antibody screen is positive, then it is an indication that one or more RBC antibodies are present. Some of these antibodies may be more significant than others. When an RBC antibody screening is done before a blood transfusion, a positive test indicates the need for an antibody identification test to identify the antibodies that are present. Once the antibody has been identified, then donor blood must be found that does not contain the corresponding antigens so that the antibody will not react with and destroy donor RBC antigens after a blood transfusion.

Each blood transfusion that a person has, exposes them to the combination of antigens on the donor’s RBCs. Whenever the transfused RBCs contain antigens foreign to the recipient’s RBCs, there is the potential to produce an antibody. If someone has many blood transfusions over a period of time, they may produce antibodies against many different antigens. This can make finding compatible blood a bit difficult.

You don’t need to prepare for this test. But be sure that your doctor knows about all the medicines, vitamins, and supplements you are taking. This is extremely important.