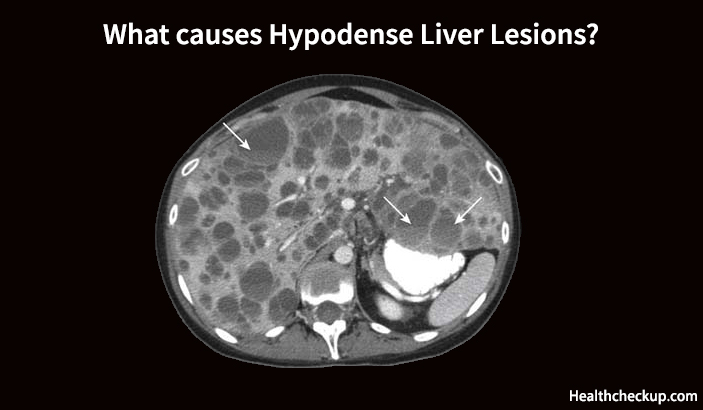 A Hypodense Liver Lesion or Hypodensity Liver is a deformity in the liver tissue that appears less dense than the surrounding tissue in radiological scans such as Computed Tomography (CT) scans or Magnetic Resonance Imaging (MRI). The appearance of these lesions in the radiological tests does not improve with the injection of intravenous contrast, and their presence may indicate a number of liver conditions including hemangioma, benign/malignant lesions, lipoma, liver abscesses, or simple hepatic cysts. Physicians use physical examination, the patient’s medical history, and clinical symptoms, and liver function tests along with CT scans or MRI to diagnose hypodense liver lesions.

What Causes a Hypodense Lesion on the Liver?

The causes of hypodensity liver lesions are many and they could include benign liver cysts that have no symptoms or malignant tumors which are usually associated with certain symptoms.

Sometimes a part of the liver tissue may become hypodense as compared to the nearby tissue due to focal fatty changes or due to primary or secondary tumors. If the entire liver tissue becomes hypodense, and especially if the mean attenuation is considerably less than that of the spleen, it suggests diffuse infiltration with fatty change. Also, a change in the liver density may appear radiologically if a contrast substance is administered during a CT scan.

The Detection of Liver Masses

Liver masses or lesions are usually detected on CT scans, and their visibility on these scans depends on the weakening difference between the lesion and the normal liver. Liver tumors are usually not detectable on a Non-Enhanced CT scan (NECT) because the characteristic contrast between the normal liver parenchyma and the tumor tissue is very low. The NECT is not very effective in detecting tumors comprising of fat, cystic components, calcifications, or haemorrhage, and therefore intravenous contrast must be used to enhance the visibility of these tumors in the scans.

The same logic is used to detect hypovascular lesions in the liver. These lesions are detected in the portal venous phase when the normal liver parenchyma appears maximally enhanced. During this phase, the hypovascular tumors remain obscure and appear as hypodense lesions in a relatively hyperdense liver.

A satisfactory arterial phase imaging depends on two important factors, i.e. optimal timing and the speed of contrast injection. Hypervascular tumors have been found to augment optimally after 35 seconds after the contrast injection is administered i.e in the late arterial phase. This is the time taken by the contrast to pass from the peripheral vein to the hepatic artery and to diffuse into a liver tumor if present.

The late portal venous phase is also called the hepatic phase because the enhancement of the hepatic veins also takes place during this phase. If the hepatic veins’ enhancement is not seen at this phase, it means that the scanning is being done too early. In case only portal venous imaging is required, as in the case of the detection of hypovascular metastases in colorectal cancer, there is no need for fast contrast injection. An injection rate of 3ml/sec is sufficient because only the total amount of contrast is more important in this phase.

The phase in which the contrast starts to exit the liver and the liver tissue starts to decrease in density is called the equilibrium phase. This phase begins after 3 to 4 minutes of administering the contrast and the best imaging results are obtained at about 10 minutes of contrast injection. Imaging is usually done in this phase to detect fast tumor washout in hypervascular tumors like those of Hepatocellular Carcinoma (HCC) or retention of contrast in the blood pool as seen in hemangiomas or the retention of contrast in fibrous tissue in capsules in case of HCC or scar tissue in focal nodular hyperplasia or Cholangiocarcinoma.

Well-organized fibrous tissue that is dense takes a long time to let a contrast substance such as iodine or gadolinium in, and once the contrast is getting into the tissue, it takes a long time to get washed out in the equilibrium phase. The fibrous components of hepatic tumors usually appear brighter than the surrounding liver tissue when the contrast washes out. In the case of Cholangiocarcinoma, the delayed phase may be the only time that a tumor can be detected because the tumor tissue will appear lighter than the surrounding liver parenchyma as it is more washed out than the normal tissue.

Benign lesions follow a different type of contrast washout pattern. For example, in focal nodular hyperplasia or in case of an adenoma, the lesion will exhibit a fast enhancement in the arterial phase, and it becomes isodense in the portal venous phase and continues to stay isodense with the liver tissue even in the equilibrium phase. This pattern is displayed by the benign tumors due to the lack of sufficient neoplastic neovascularity to have a fast contrast wash out. Especially in cirrhotic patients, doctors rely on the delayed phase to differentiate a benign tumor that exhibits little enhancement from a hepatocellular carcinoma tumor.

What Do We Conclude..?