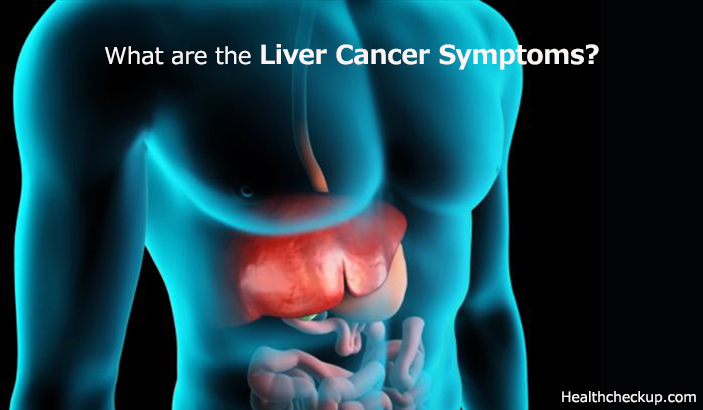 Causes and Symptoms of Liver Cancer

Normally, cancer symptoms are not diagnosed at early stages, so is the same with liver cancer symptoms. Only when the cancer reaches the advanced stage, there will be more appearance of symptoms.

Actually there are no broadly suggested routine screening tests for liver cancer, hence individuals who have a family history of the disease or if suspect other risk factors must consult their doctor about measures they can consider to have a check or decrease the risk of developing liver cancer.

Each person may exhibit cancer symptoms in a different way. Any one of the symptoms may be triggered by other, benign conditions.
Below are Few Common Liver Cancer Symptoms which Include:

What are the Liver Cancer Symptoms in Males?

The Liver Cancer Symptoms in Males Include:

What are Liver Cancer Symptoms in Females?

The Liver Cancer Symptoms in Females Include:

What are the Causes of Liver Cancer?

Causes of liver cancer is quite unknown. Nonetheless in certain cases, there can be a known cause. For instance, if an individual has chronic infection with the hepatitis viruses then that can cause liver cancer.

Liver cancer happens when liver cells build variations in their DNA, the material that gives the commands for every chemical process in your body. DNA mutations cause ups and downs in these commands. One consequence is that cells may initiate to grow of control and ultimately form a tumor which is a cancer cells mass.

What are the Risk Factors of Liver Cancer?

Age: The average age at onset of liver cancer is above 62 years.

Gender: Men are more probable to develop liver cancer than women, by a ratio of 2 to 1.

Race and Ethnicity: Chronic infection with Hepatitis B virus (HBV) or Hepatitis C virus (HCV) is the utmost generalized liver cancer risk factor. The above infections causes cirrhosis of the liver. Both hepatitis B and C viruses can spread from person to person via taking used or contaminated needles (example like in drug use), unprotected sex, and childbirth. They can also be passed on via blood transfusion. Although, this risk has been reduced if blood testing is started for these viruses.

Obesity: IF the individual is obese, then it increases the probabilities of rising liver cancer, maybeviagrowth of NASH and finally, cirrhosis.

Alcohol Heavy Use: Alcohol abuse is the most common cause of cirrhosis of the liver that increases the risk of liver cancer in an individual.

Smoking: Tobacco use may trigger the risk of increasing liver cancer.

Anabolic Steroids: Generally few athletes use these steroids to increase strength and muscle mass. It has been reported that the long-term use of anabolic steroids which are male hormones can some what rise the risk of developing liver cancer. Hydrocortisone, dexamethasone, and prednisone which are cortisone-like steroidsare not proved to carry the same risk.

Aflatoxins: Aflatoxins are cancer-causing substances prepared by a fungus that pollutes wheat, rice, soybeans, corn, and other types of nuts. Pollution normally happens due to storing of the food stuff in a warm, moist environment, which are common in warmer and tropical countries. Long-term acquaintance to aflatoxins is a main liver cancer risk factor, particularly in people with HBV or HCV infections.

Chemical Exposure: Exposure to few of the chemicals like vinyl chloride (which is used to make of some plastics) and thorium dioxide (which was used for x-ray testing before) can increase the risk of increasing liver angiosarcoma.

Liver Cirrhosis: Cirrhosis happens when liver cells gets damaged and are replaced by scar tissue. People with cirrhosis have an increased risk of liver cancer. In many cases, individuals who develop HCC have original cirrhosis. There are many possible causes of cirrhosis. In addition to alcohol abuse and long term HBV or HCV infections, and non-alcoholic steatohepatitis (NASH), few kinds of inherited metabolic diseases, and autoimmune diseases can lead to cirrhosis.

Metabolic Diseases: Few kinds of inherited metabolic diseases can lead to cirrhosis and rises the chances of developing liver cancer. Genetic hemochromatosis (this is an iron-overload disorder which builds up iron stores during the body along with the liver), tyrosinemia (increased levels of the amino acid tyrosine), porphyria cutaneatarda (deficiency in heme synthesis), alpha-1-antitrypsin deficiency, glycogen storage disease, and also Wilson disease (increased levels of copper in the liver) are very rare diseases which can damage the liver and will increase the risk of a person’s liver cancer.

Diabetes: Having diabetes can also lead to increase the risk of getting liver cancer.

How is Liver Cancer Treated?

Liver cancer treatment be influenced by on the stage the condition is at. Suppose if it has been diagnosed early, it may be likely to eliminate the cancer fully.
Early stages treatment options of liver cancer include:

Nevertheless, very little proportion of liver cancer symptoms are diagnosed at a stage where these treatments are appropriate. Most people are identified when cancer has spread too far to be detached or completely destroyed. Normally, in these cases, treatments such as chemotherapy will be used to slow down the spread of cancer and get rid of symptoms like discomfort and pain.