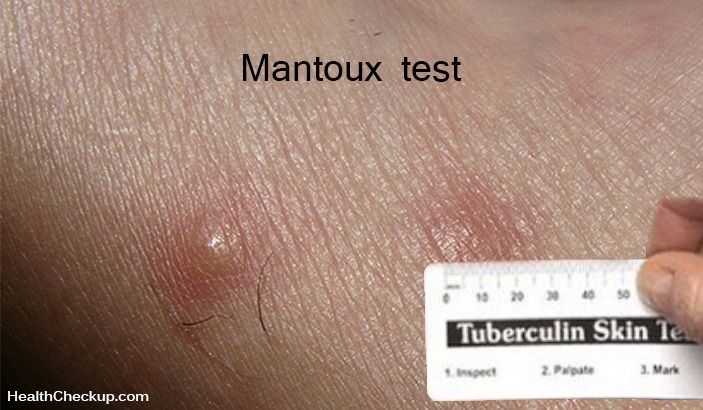 What is Mantoux Test? A Screening Tool for Tuberculosis (TB)

Mantoux test, also known as Tuberculin Skin Test and PPD (Purified Protein Derivative) test is a simple and harmless method to find out whether an individual has been exposed to tuberculosis bacterium or if he has a latent TB infection. The mantoux test gives effective results if someone currently has TB, if he was exposed to TB bacterium in the past or if he has received the BCG vaccine against TB.

Reasons To Do the Mantoux Test

How Does The Mantoux Test Work?

This PPD material is administered to the skin for testing tuberculosis infection. The raised area on the skin site where the PPD was injected indicates the immune cells or T-cells have reacted and attracted by the immune system to the site where the tuberculin protein derivative was released. The immune cells release lymphokines at this site which causes hardening of the injection site due to local vasodilatation.

How To Perform The Mantoux Test?

The Mantoux test is performed by injecting 0.1 mL of a liquid that contains 5 TU (tuberculin units) of PPD to the top layer of the skin of the forearm. The skin area should be free of any abnormalities and away from the veins. The injection consists of a 27-guage needle and a tuberculin syringe. Once the tuberculin PPD is injected, a pale elevation of the skin 6mm to 10 mm in diameter should be formed.

A tuberculin reaction test is classified as positive depending on the diameter of the induration in combination with some patient-specific risk factors.

In a normal, healthy individual with the properly functioning immune system, an induration greater than or equal to 15 mm is considered a positive skin test. Presence of blisters also indicates a positive result.

The test result is considered negative when there is no skin reaction to the injection. But a negative test does not always mean that a person is free of tuberculosis bacterium.

People with TB infection may have a false negative test result if their immune function is compromised by AIDS, chemotherapy or any chronic medical condition.

10 to 25% of people with newly diagnosed tuberculosis of the lung have false negative results due to poor immune function, poor nutrition, steroid therapy or any viral infection.

People infected with any other types of mycobacteria other than Mycobacterium tuberculosis can also have false positive skin test result.

Mantoux test is a simple and safe procedure that does not produce any adverse side effects.

However, a tuberculin skin test should be avoided if a person is known to have TB infection, if a person had a pervious severe reaction to TB antigens or if a person already suffers from a severe skin rash that would make it difficult to read the skin test.

After Test Care of The Site

The mantoux test is an important test for determining TB infection, but this test alone cannot confirm an active TB infection. The result of the Mantoux test is considered in conjunction with other tests such as chest X-ray and sputum cytology. You can always consult your doctor about any concerns you have regarding the tuberculin skin test, its procedure, risk factors and results.