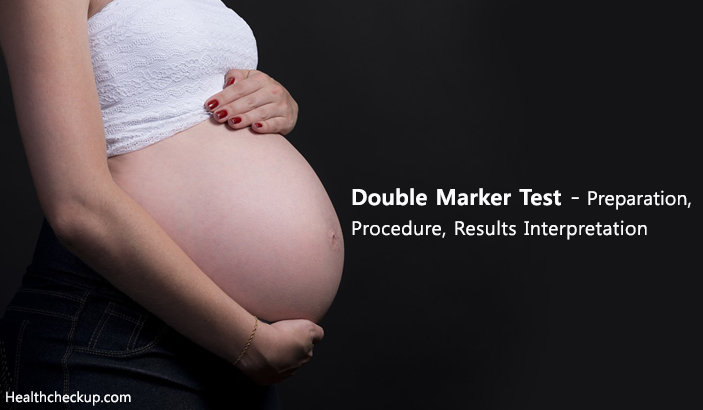 The blood test includes testing for the maternal blood levels of beta Human Chorionic Gonadotropin (beta HCG) and Pregnancy Associated Plasma Protein- A (PAPP-A). HCG is a hormone that is secreted by the placenta and beta subunit is specific for humans and PAPP-A is a peptidase produced by syncytiotrophoblasts of the placenta.

With regards to the preparation, there are no specific steps to be taken other than giving a comprehensive description of the test. The purpose of the investigation should be explained to the pregnant mother. She should be encouraged to consider the action to take if the test results come out positive. And it is also important to explain that this is only a screening test and she needs to further undergo some invasive diagnostic tests like amniocentesis and chorionic villus sampling. All positive screening fetuses do not always become positive in diagnostic tests. At the same time make clear that all negative results of double marker test do not completely rule out the possibility of carrying a fetus with a chromosomal abnormality.

Two blood samples of the pregnant woman is drawn and they are tested for the levels of beta HCG and PAPP-A. Along with the blood tests, the nuchal thickness of the fetus is measured with the help of an ultrasound scan as part of the procedure. The nuchal thickness is a measurement of the thickness of a pad of skin in the neck region of the fetus done under ultrasound guidance. When it is done along with the double marker test it is known as a combined test and has a higher sensitivity than doing the double marker test alone.

The normal values for beta HCG is 25700-288000 mIU/m and PAPP-A is 1 MoM (multiple of median), regardless of the mother’s age. A higher level of beta HCG and lower level of PAPP-P level indicate positive results. The positive test result indicates that the woman is at higher risk of having a fetus with such abnormality and a negative result indicates a lower risk. Thicker skin pad makes the fetus to be at high risk of having Down’s syndrome. About 5% will have a positive result in this test but the majority will test negative in the diagnostic tests.

When is Double Marker Test Done?

The double marker test in antenatal care is recommended to be performed at a gestational age of 11-14 weeks when there is the highest sensitivity. Since both hematological markers are secreted by the maternal placenta, the time period of placental formation is considered as the best time to perform the test.