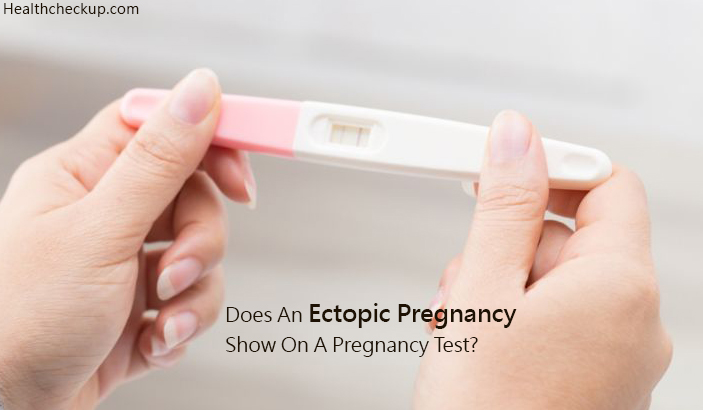 Does An Ectopic Pregnancy Show On A Pregnancy Test?

What Is An Ectopic Pregnancy?

Therefore, an ectopic pregnancy is a medical emergency requiring prompt medical attention since it can be a life-threatening condition for the pregnant woman. It is also the leading cause of maternal deaths, especially during early pregnancy.

Ectopic pregnancy can occur due to a variety of causes – congenital, due to defects in the female reproductive organs or due to acquired causes.

Some of the acquired causes of ectopic pregnancy are

Risk factors for ectopic pregnancy include the following

Signs And Symptoms Of An Ectopic Pregnancy

Ectopic pregnancy may mimic a normal pregnancy by the presence of missed periods, breast enlargement and morning sickness and hence it may be difficult to diagnose it based only upon the presenting signs and symptoms.

The above-mentioned set of alarming signs and symptoms may occur as a result of a ruptured ectopic pregnancy causing internal bleeding. This results in a condition called hypovolemia (reduced volume of blood) and eventually a state of collapse.

Does An Ectopic Pregnancy Show On A Pregnancy Test?

Detecting an ectopic pregnancy is not as easy as it seems, yet it can be diagnosed clinically with the help of a relevant history of missed period and presenting signs and symptoms, supported by suitable laboratory and radiological investigations.

Beta-human chorionic gonadotropin hormone (beta-hcg hormone) can be detected on a urine pregnancy test on about 24th day after last menstrual period. Beta-hcg test performed only once is of little value for the purpose of detection of ectopic pregnancy. However, it is a useful tool to detect if the pregnancy is a normal or an abnormal one.

Side Effects Of Ectopic Pregnancy

Although ectopic pregnancy is a medical emergency, yet the medical science is now potent enough to detect it at an early stage with the help of urine pregnancy tests, transvaginal ultrasound, and beta-HCG hormone test.

Since ectopic pregnancy can greatly influence maternal fertility as well as mortality, it is important for pregnant women to recognize alarming signs and symptoms of an ectopic pregnancy to aid faster diagnosis and quick management.

Ectopic pregnancy itself cannot be prevented by any means, yet its complications can be avoided by detecting it early. In such cases, increase in awareness about antenatal care can work as a potential screening tool for not just early diagnosis, but also provides a good scope for treatment of ectopic pregnancy and prevention of life-threatening complications.