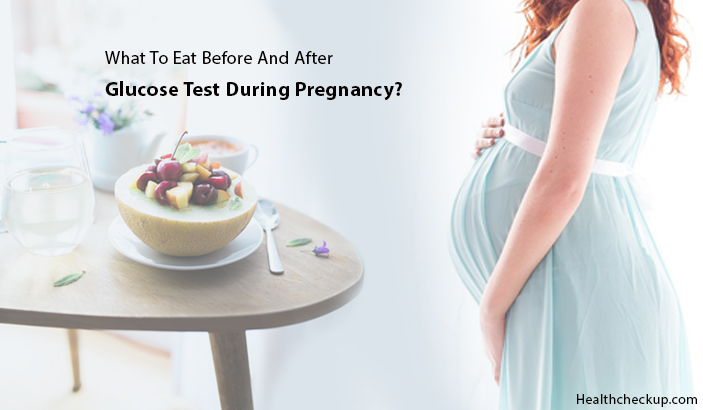 What to Eat After and Before Glucose Test During Pregnancy

It is normal for the routine test to be conducted to check an expectant woman’s glucose levels in the blood or what is simply known as sugar level. A condition known as Gestational Diabetes is when there is high blood sugar or rather diabetes that crops up in the blood system when a woman is pregnant. To ascertain whether she has this condition or not, a glucose test is required. Let’s know more about glucose test during pregnancy what to eat before and after.

The glucose test is done on expectant mother between the twenty-fourth and twenty-eighth weeks to test for Gestational Diabetes. This glucose screening test does not test for Diabetes, though it is used as an indicator to carry out advanced screening if the preliminary one hour test is high.

The two glucose tests are used by the doctor to assist them in determining if the expectant woman has gestational diabetes. Gestational diabetes can lead to the woman having pregnancy complications, so the earlier it is detected and promptly treated the better.

When women get pregnant, they are at a high risk of developing gestational diabetes and high blood glucose levels can negatively impact on their baby’s health. This is common in a percentage of about 9.2 of all expectant women.

A glucose test screens how good your body cells are able to absorb glucose or sugar after a pregnant woman ingests a specific amount of sugar. Hypoglycemia in some cases is a condition which is tested in blood glucose screening. It occurs when the levels of glucose in the blood of the expectant mother are extremely low.

The Test is Performed in Two ways

Two Step Glucose Test – In this test the first step involves having a glucose screening test. The expectant woman does not need to alter their usual diet at all, they only need to drink a fluid that has glucose in it, and the blood is then drawn from their body system after an hour to help in screening the glucose levels in their blood system.

During the test, they are only asked to drink a liquid which has a content of about 100 grams of glucose. You will have blood drawn before you drink the liquid, and again 3 more times every 60 minutes after you drink it. Each time, your blood glucose level will be checked.

One Step Glucose Test – The expectant woman only needs to avail herself to the lab once for a glucose tolerance test that lasts for a minimum of 2 hours. During this test, they are required not to eat or drink anything apart from drinking water for 8 to 14 hours before the test. During the test, they are needed to drink a liquid that contains 75 grams of glucose.

They will have blood drawn before they drink the liquid, it is then drawn for 2 more times for every 1 hour after they drink it. Then the blood glucose levels are checked after every withdrawal.

Glucose Test During Pregnancy What to Eat Before

This glucose levels screening test does require that the expectant woman eats some specific foods at specific times.

Glucose Test during Pregnancy What to Eat After

If the doctor gets results that show pre-diabetes or diabetes, they will go ahead and recommend that there is a need to have diet and exercise changes. If necessary one is prescribed to diabetes drugs. Treatment for gestational diabetes starts as soon as it is diagnosed.

Note: there is the necessity to drink the complete contents within a period span of five minutes.

The expectant woman usually will be scheduled for a different visit to the lab before they start attending their normal and routine prenatal visits. This is in order to make sure that their test is drawn at the appropriate time. Any further delays in drawing your blood for the Glucose Test can lead to negative results forcing them to do the test once more. For successful test pregnant mother should do a lot of research on glucose test during pregnancy what eat before and after more so they should know the effects of eating sugar day before glucose test.