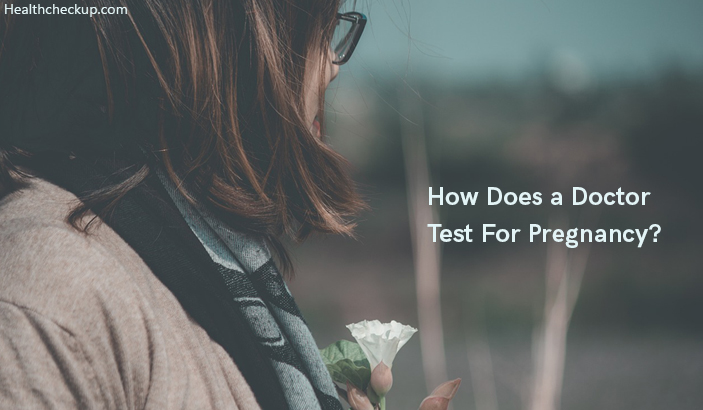 How Does a Doctor Test For Pregnancy?

Maybe you’ve been trying to get pregnant for a long time, or maybe it happened by coincidence. Maybe you had ‘the feeling’ or maybe you simply noticed that something was missing and that something was your period. Anyway, it resulted here: you’ve seen those two lines on that stick. But still, sticks may lie and you are headed to a doctor for what can be your first prenatal appointment. And if it’s your first pregnancy, you’re no doubts wondering how does a doctor test for pregnancy; totally understandable. Don’t worry, here is the information of all you should know before you even pick up your phone to call the practitioner’s office.

When to Consult Doctor for Pregnancy Test?

Those two lines can’t actually assure you’re pregnant. Which means, it’s always best to perform the Home Pregnancy Test (HPT) at least twice to double-check. But if it shows those two lines both times, it’s probably time to make an appointment with your gynecologist.

You can make an appointment starting the first day you’ve noticed your missing period. Officially your pregnancy counts from the first day of your last menstrual period, which means, for your practitioner you’re almost 5 weeks pregnant now and he or she can provide you with a few tests and check if your positive pregnancy test wasn’t wrong.

Your practitioner may be able to see you as soon as possible, or maybe, if he or she works in some very busy office, you may have to wait for a few weeks. There are offices that require waiting until 6–8 weeks of pregnancy before the first appointment. The others are ready to start examining you right away. And most offices have an option of an early check if all you need is some reassurance and a few tests.

For you, the best option will be an appointment to the doctor you know and, which is more important, for the doctor who knows you. You are going to put all your medical history on the table if you’re pregnant, so maybe you’ll need some help. Doesn’t it feel easier to reconstitute everything that happened to your health before with a doctor you’ve been working with for years?

How Does A Doctor Test for Pregnancy?

There are two ways to test for a pregnancy at your doctor’s office. The first one is a blood test. Generally it’s made along with the second way, the urine test, just to reassure.The thing the doctor is going to look in your tests for is hCG or Human Chorionic Gonadotropin. This hormone is produced in pregnant woman’s body and its levels increase in geometric progression during pregnancy. That’s actually the same hormone your home pregnancy test was checking for.

If hCG shows up in both blood test and urine test, congratulations, you’re totally pregnant! Another point: blood test can be made earlier than even home pregnancy test since it shows the smallest hCG changes that stick can’t catch. So if you’re working really hard on getting pregnant, you can make an appointment and do the blood test for pregnancy in as early as 10 days after the moment you think you might’ve conceived.

The next thing a doctor can do is to perform a medical exam. During the medical exam, a doctor is looking for physical signs of pregnancy, like enlargement of the uterus, a change in the texture of the cervix, and color changes in the vagina. Some moms-to-be may worry this exam can be harmful to the baby — don’t. But to tell the truth, clinic tests accuracy actually proved itself today and there is no exact need of performing such an exam.

How Long Does It Take for A Doctor to do The Pregnancy Test?

It’s quite tempting to wait for such life-changing test results, isn’t it? And it should be. But sadly enough, there is no strong answer to this question. Since there are a few types of practice and different medical offices act differently, Your results can come to you right away, while you’re still at your practitioner’s office, or you may need to wait for a day, two tops. It all depends on local lab and your practitioner’s style of practice.

hCG levels are usually measured in mIU/L. Please do not compare your tests results with your friend’s: every pregnancy is different and every hCG levels test result either. But the approximate numbers you may see based on your pregnancy term are these:

Please remember that if your hCG level is not the top one, it doesn’t show something goes wrong in your pregnancy. That’s just a matter of organism and the way it speeds up while preparing to grow up a small human being in it.

It can happen, that one day your HPT is positive, and the next one it’s not and you’re getting your period. Unfortunately, that happens. That’s called a Chemical Pregnancy: your egg was fertilized, but never reached the implantation stage. Most women who experience this actually never know they had any pregnancy started, it all looks like the period just delayed a bit, which, as we all know, is not an uncommon thing also.

Technically it’s a pregnancy that never occurred, not a miscarriage, but it can be a big disappointment for women who were looking for there two lines and testing for pregnancy early. Chin up! The one conception means that another one will occur soon, and in the result, you are going to have your sweet new mom-to-be status.