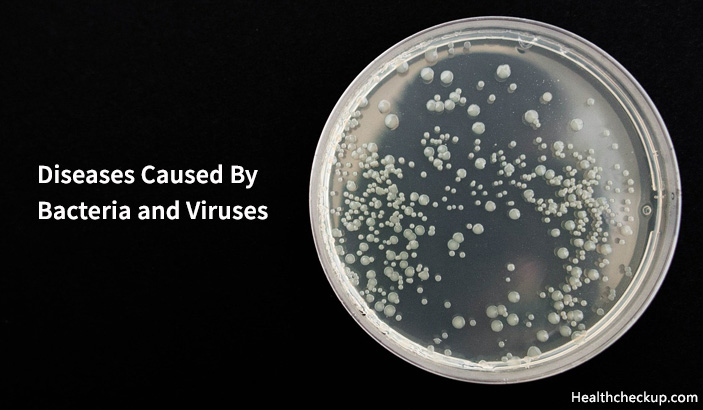 List of Diseases Caused by Bacteria and Viruses in Humans

Most human infections in the world today are either caused by viruses or bacteria. Bacteria are small single celled organisms and are amongst the most successful life forms on the planet. A virus is a micro organism and it is usually very difficult to kill.

Bacteria can reside in any location or climate on earth. Also, it can live on or inside animals, people, and plants. Bacteria that cause diseases are known as Pathogenic Bacteria. They produce poisonous substances called Exotoxins and Endotoxins that present various mild to serious symptoms. Below is the list of some human diseases caused by Bacteria

Pneumonia is caused by bacteria called Streptococcus Pneumonia. It is found in the respiratory tract and though it causes infection in the lungs, it doesn’t cause infection to healthy individuals. The infection usually starts when the bacteria are inhaled and reproduces themselves at a rapid rate in the lungs. If it becomes pathogenic, it results in pneumonia. Streptococcus Pneumonia is usually cocci shaped bacteria.

Most common symptoms of pneumonia include coughing, high fever, and difficulties breathing among others.
Pneumonia is mostly treated with antibiotics. A pneumococcal vaccine helps to protect against the development of this disease.

Cholera is caused by bacteria referred to as Vibrio Cholerae. It affects the intestines of the infected individual. It is a foodborne disease and it’s mostly spread by water and food contamination. Most cases of infections happen in regions with poor water and food sanitation.

Symptoms of cholera vary from mild to severe and they include vomiting, diarrhea, and cramps. Research suggests an approximate of 3-5 million cholera cases annually where about 100,000+ people die. Cholera is treated by antibiotics in severe cases while the infected individual is hydrated in mild cases.

Tuberculosis is one of the most common and widely distributed bacteria diseases in the human population. It is caused by bacteria called Mycobacterium Tuberculosis and mostly infects bones, lungs, brain, and the abdomen.

Tuberculosis is spread through the air, for example when an infected person coughs, sneezes, or talks and is very deadly if not treated. The rise of HIV infections especially in developing countries has also increased the cases of tuberculosis. This is because HIV weakens the immune system of those affected therefore not being able to fight pathogens.

The most common symptoms that are associated with tuberculosis include fever, weight loss, lack of appetite, and chronic cough. Tuberculosis is treated with antibiotics and also, isolation of the infected persons can help prevent the spread of an active infection. Treatment for tuberculosis can last for longer, say one year, depending on the severity of the infection.

The most common Sexually Transmitted Diseases caused by bacteria include Syphilis, Gonorrhea, and Chlamydia. They are caused by;

These infections are curable by the use of the appropriate antibiotics. However, if they are left untreated, they can lead to severe complications such as pelvic inflammatory diseases in women and can even spread to other body parts causing further infection. Most of these infections are accompanied by itchiness, swelling, fever, and abnormal discharge.

Typhoid is caused by bacteria called Salmonella typhi. In most cases, it develops due to contaminated water or food especially mass food. The most common symptoms include fever, vomiting, and weakness.

Diseases caused by viruses are called Viral Infections. They are caused by various infectious agents that present in living cells.

Ebola is caused by a virus called Ebola. It is one of the most contagious viral infections in the world. It occurs in both animal and humans. Ebola is transmitted by having a direct contact with infected fluids such as sweat, discharge, vomit, or urine. The hemorrhagic fever is the most common symptom. It leads to physical exhaustion, muscle aches, headache intense, high fevers, and abdominal pain. It cannot be prevented by vaccination.

HIV attacks the human immune system making it weak and therefore not being able to fight life-threatening infections. It is transmitted through unprotected sex, sharing sharp objects or syringes, mother to child during birth or lactation period, and direct contact with open wounds. It can be prevented by having protected sex, sterilizing shared sharp materials or avoid sharing of syringes.

It is caused by yellow fever and it’s common in Africa, Central America, and South America. It spreads through Aedes Aegypti, Aedes Haemogogus, or Aedes Sabethes mosquitos. They bite and feed on the infected blood and transmit it to healthy individuals through its sting.

Symptoms of yellow fever include mouth and nose bleeding, dark color vomit, yellow pigmentation of the skin, dehydration, high fever, and cardiac arrhythmia. It can be prevented by vaccination of individuals between 9-60 years and reapplied every 10 years.

Influenza is one of the most common viral infections in humans. It forms when the RNA virus camps and reproduces in the host cells of the body. It affects the respiratory tract. The most common symptoms are fever, headache, malaise, body weakness, vomiting, cough, diarrhea, and sore throat. It can be prevented by the influenza vaccines to adults 65+ years during the fall season.